So Many Dick's, Let Me Count the Ways, posted by phishnet

[Thank you @Choda for sharing your thoughts on Dick's, as we head into this special three-day holiday weekend of "Dinner and a Movie" Dick's webcasts. If you watch any of them please consider donating to Phish's charitable arm, The WaterWheel Foundation, as all funds donated to WaterWheel this weekend will benefit The Mockingbird Foundation, whose volunteers run dot net. -Ed.]

If the Great and Knowledgable Icculus took me from the Earth on this day of our Gamehendge, September 4th 2020, I would stand before him in my Birthday Suit (for being naked in front of a powerful deity is a requirement if y’all didn’t know) and be judged for my life as a faithful Phish fan (and trust me, I saw 28 shows in 2.0). Icculus would peruse his iPad Pro and check out my stats:

Choda: “Yes Icculus! I almost died driving back to Ithaca that night but totally worth it.”

Choda: “Yes, my sweet Icculus! It was a glorious night in Worcester ‘97!”

Then, Icculus would pause briefly, and look up from the screen, stunned:

Icculus: “OH MY!! You attended every show at Dick's?”

Choda: “Mighty Icculus, all I can say is: I LOVE DICKSl!! (Just ask [phish.net username withheld])

As Woody Allen says in Annie Hall, “if only real life were like this.” When @DaleCooper asked me to write a little blurb on the celebration of the weekend, I was kinda like “Why?”. But, just as MSG was to me in 1.0, Dick’s has become my 3.0 Phish home. In 2011, I had no intention of attending Dick’s. I was satisfied with having gone to the Red Rocks run in ‘09 and felt that had filled my Colorado quota. Plus UIC was damn fire, and I was also heading to MSG for NYE anyway.

A friend blew through Chicago during those two weeks before the inaugural Dicks run and said I would have a free hotel if I came… All I needed to do was get tix and a way there. I was still in my 30’s so my vim and vigor made me take the leap of faith. So, I found a ride with three other very young .netters, easily procured a 3-day pass (plenty floating around), and committed my mind to the idea this was going down. 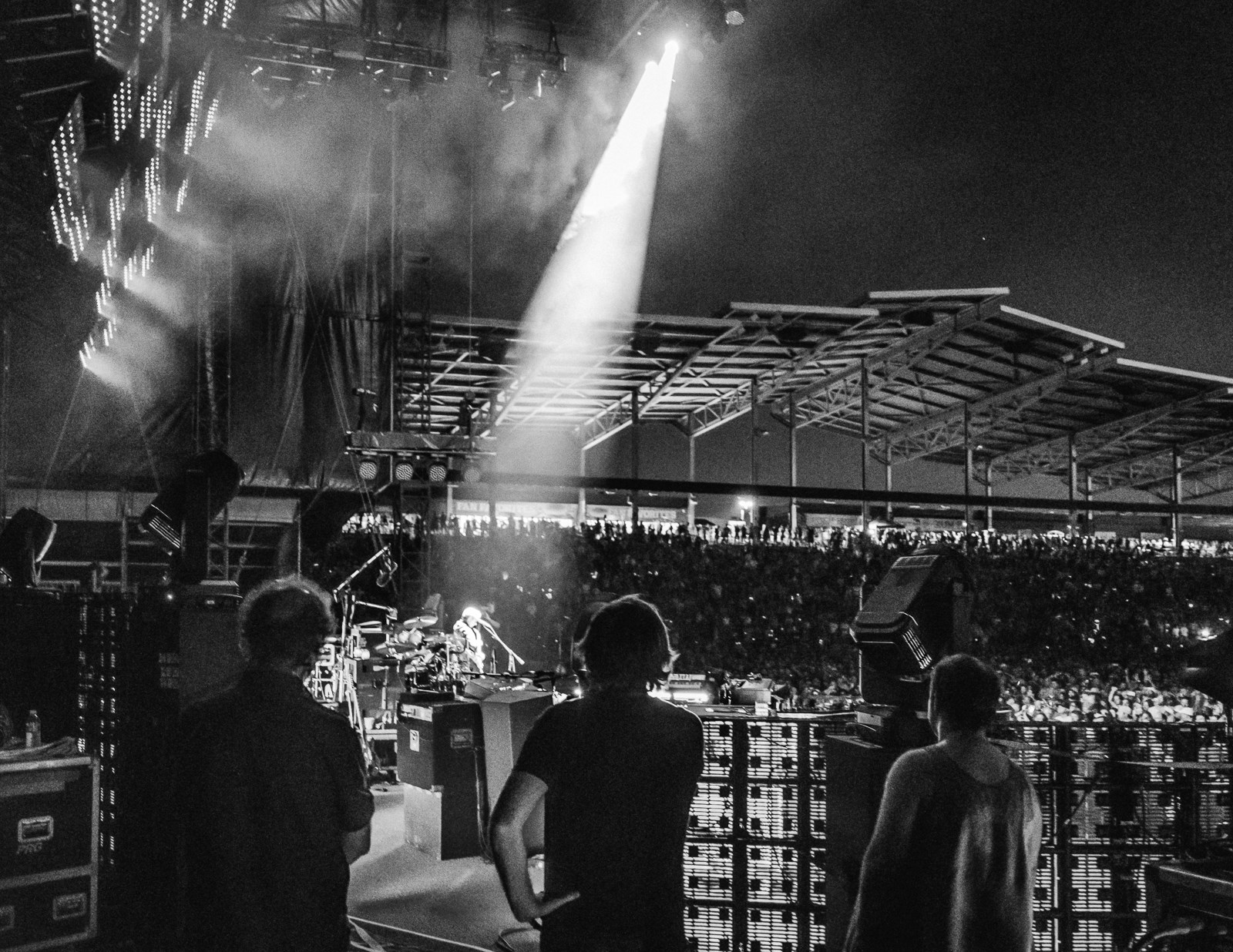 My companions and I left Chicago Thursday during the afternoon rush hour (yikes), and the dude’s beater car overheated and stalled on the highway before even getting outta the city limits... Not a great start. After some police help, we finally got the car going and were on our way. What I’ve discovered about the 1000 mile trek to Denver is that it’s boring and kinda sucks. So, I slept for the first leg of the trip, until around midnight I was awakened by the insanity of the 8/5/11 "Rock and Roll." I thought space aliens were trying to kidnap us...

I was getting a little excited to get to Denver. The thing I remember most about that drive was taking over captain duties, having the 2am-6am driving shift. As we were cruising across the Nebraska plains, there was the most amazing lightning storm in the distance. While my companions slept, I soaked in the beauty of cruising the land of the brave and free. Now I truly couldn’t wait to see if this Dick’s run would live up to the adventure and spontaneity!

So, I just finished a relisten of the ‘11 run and it is still as thrilling nine years later. That first night, I got my first "Sanity," "Sparks," "Sweet Virginia," first "Sweet Adeline" since the 90’s, and a "Sabotage" that was as thrilling as my first in 8/8/98. Yeah, I love Dick's. The most amazing thing about this venue is that it’s like a diamond in the rough, a sterling bright Mecca in the middle of the ugliest part of town. Once you get on site, it’s like being in Phish heaven, with all the fluffy grass and wide open spaces. The icing on the Dick's cake, from going all nine years, is how knowledgeable you become about the ins and outs of doing Dicks the “right way.” All I hoped for after that first year was that Phish would make this a regular stop on the circus train.

In all honesty, I was going to skip Dick's for the first time in 2020 to get back on the MSG trek, but then COVID happened and now who knows when our precious band will return? I’m going to interpet it as a sign, because if this is it for me and Phish, I can at least say that my final show happened at Dicks Sporting Goods Park. That’s something I can most certainly live with the rest of my days. I could write a 100 page thesis of all the good—and occasionally bad times (I’m looking at you bad boomers in ‘13)—over the past nine Labor Day weekends: "Guy Forget," FYF being show #150, my lifetime dream of seeing an "Antelope" opener (my favorite Dick's night), finally seeing "Suzy" with horns, catching "Icculus" for the first time in 14 years, the return of "Keyboard Kavalry" and "Once in a Lifetime" in the same encore, "Legalize It," "In a Hole" (it debuted in ‘89 Page), Fishman almost passing out from rocking, the first post-Baker's Dozen show (that ended up being the best of summer ‘17), post-Curveball amends, and the many friends and .netters I have met as well. Dick's has certainly become my beacon of light in a world of flight.

"MOST SHOWS SPELL SOMETHING" has never been truer! Happy Labor Day and keep those Dick's swinging.